2017 began with a humbling, never imagined excitement and has shown no sign of slowing since.

In the final days of last year, the wonderful Boomer Stacey (organiser of the International Performing Arts for Youth showcase, and all-round nice gent) contacted me with whispers of an award received and the invitation to come and collect it in Wisconsin mid-January. What followed was a mad rush of emailing and an avalanche of generosity from Boomer and the lovely folk at The Australia Council and DFAT (huge thanks to Marion, Kathryn, Lee and Michael) which culminated in 72 hours of international travel for 72 hours on snowy, Madison soil.

In front of a crowd of highly-respected peers and mentors, and introduced onstage by the loveliest speech from one of the loveliest humans I know, Mary Rose Lloyd, I received the 2017 Mickey Miners Lifetime Achievement Award for services to theatre for young audiences. For those who wish to read the words delivered with a shaking voice that evening, here they are:

Since then I’ve settled back on home soil and into the writing of words. Editor Nathalie Handal very nicely invited me to write a Tasmanian entry for her Words Without Borders series (below):

The City and the Writer: In Hobart

The English departments at Hobart College and The Friends School invited me in to lead playwrighting workshops with inspiring and erudite students.

And the writing of five new plays was sat down to, with a project currently being penned for every age of audience:
– An immersive adventure for Brisbane’s Imaginary Theatre will see head-phoned students flee their teachers, and navigate the labyrinthine beauty of Her Majesty’s Theatre in Ballarat.
– An adult work written for wonderful Hobartian actor Guy Hooper (in co-pro with Tas Performs and Blue Cow) chronicles one man through the speeches we might utter in a lifetime.
– A playfully philosophical tale for Perth’s Barking Gecko follows a girl who truly ‘makes a friend’ (and stars an actual robot, as invented by actual geniuses, actually): My Robot
– A complex, unapologetic work for Milwaukee’s First Stage and Chicago’s Filament Theatre explores what it is to be a teenager growing up in this volatile American moment: Antarctica WI
– And a library-centric tale for Leicester’s Spark Arts for Children is anything but quiet, created across a globe and set to tour far and wide in England: Sylvia South and the Word Catcher 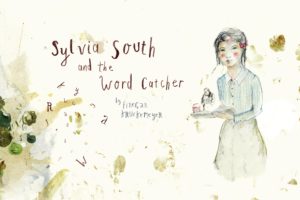 The latter (with beautiful image by longtime friend and collaborator Andy Ellis) will see me board a plane next week for a UK development with director Adel Al-Salloum and her Spark Arts team.

And coinciding nicely with this adventure is the pleasure that is the Edinburgh International Children’s Festival, which will this year (alongside great offerings from around the world) host Terrapin Puppet Theatre’s You and Me and the Space Between. Exciting to sit in an audience of colleagues and friends and watch it play on Scottish shores – and also to hold my breath until this coming Monday when the NSW Premiers Literary Awards are announced, with this work for families shortlisted among great adult fare:

Meanwhile over the past five months, plays have been brought to life by 23 wonderful ensembles worldwide, ranging from The Czech National Theatre presenting At Sea, Staring Up in Prague, to Vermont’s Essex High School reaching the National Drama Finals with their production of The Boy at the Edge of Everything. I’m truly thankful to every company that chooses to produce a play, whether on an ornate national stage or in a spartan classroom. Thanks to the directors, producers and teachers for stories shared of the lives these characters have had far and wide.

Finally, perhaps the most satisfying experiences this year have been to sit in a theatre and watch Essie’s dance-theatre work The Love Project (born of myriad interviews and siphoned through the physicality of great performers) premiere in the Ten Days on the Island Festival. Or to sit at a dinner table and hear our son Moe wax lyrical with the grand rambling wisdom of a two-and-a-bit year old. Together we and our friends have harvested summer fruit trees, and said hello to five chickens and one cat (with a wide berth kept between).

And now we welcome winter and whatever it may bring.