After a lovely summer break of Adelaide family visits and garden days, it’s nice to be sat back at the computer, diving into the writing of new words and watching of past plays as they live again.

Central to this is the myriad existences of This Girl Laughs, This Girl Cries, This Girl Does Nothing, which in 2018 enjoys seven different productions in seven different US states – with three of these opening on the same February day! In New York, it enjoys a month-long Manhattan season at that illustrious stomping ground of Mamet, Macy and McDonagh, the renowned Atlantic Theatre (directed by Alison Beatty & Tom Costello). Meanwhile in Portland, Coho Theatre places great friend Tamara Carroll at the helm and at Alaska’s UAF it is realised a third time by Abigail van Patter.

To mark the occasion, I’ve bitten the bullet and traversed mediums, adapting it into prose form! Having been provided the most beautiful cover illustration by the ridiculously clever Andy Ellis (see below), this story of triplet sisters is now available as an ebook or print copy on Amazon. Click on the link (this one’s American but should lead to other regions) if you fancy a tangible tale sat upon your bookshelf. 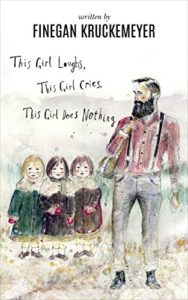 Elsewhere, the Czech Republic’s National Theatre continues its run of At Sea, Staring Up in what looks to be a stunning production, with a black hole taking centre-stage. And in California, another adult work is well located, with Segerstrom Theatre’s The Car Plays seeing two audience members placed in the backseat while a mini-play plays out at the wheel.

In Milwaukee, the excellent First Stage (run by great mate Jeff Frank and co-produced by Chicago’s Filament Theatre) presents the world premiere of Antarctica WI, a play directed by Malkia Stampley-Johson, about youthful coming-of-age at a racially and socially charged moment in American history – today.

Back in New York, the renowned Lincoln Center for the Arts plays host to the Kennedy Center production of dystopian love story Where Words Once Were, while upstate ‘The Boy at the Edge of Everything’ tumbles through space once again, this time in the safe hands of Theatre of Youth. And amidst it all, eight other productions play out around the US – if keen to know of seasons, head to What’s On.

And if you should find yourself in a theatre or tempted to buy a copy of the book, I very much hope you enjoy. Happy new year!